Boxray analyzers are X-ray Fluorescence Analyzers. However they are somewhat unique in the way they use an x-ray excitation system with two targets. The radiation path consists of a series of 90-degree bends. The series of bends ensures that none of the radiation used to excitate the sample reaches the detector. 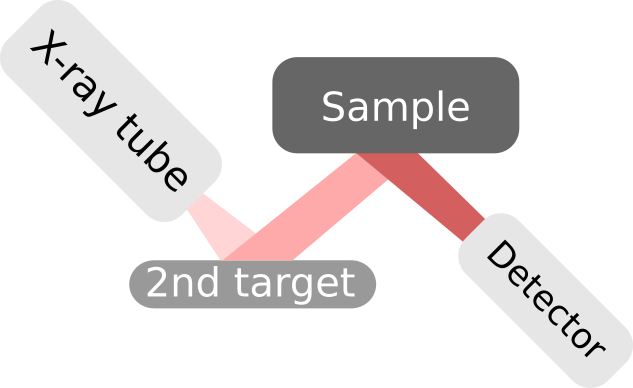 An X-ray Flourescence Analyzer exposes a target with primary x-rays and a sample with a secondary beam of x-rays which then reaches the detector.

Excitation with a secondary target

The primary target is made of Tungsten and is an inherent part of the x-ray tube. The secondary target's composition is optimized for the sample and it may be a target with only one element, or a combination of elements. What targets to fit is decided when ordering an analyzer. Some common targets are:

The first two are commonly selected for clients with Copper, Lead, Zinc and Nickel as their main products. A Tungsten secondary target is used when e.g. Gold is to be analyzed because it has a high atomic number and is a heavy element. The Iron target is used for more specific applications, for instance when a client wants to analyze Sulphur content in the sample.

As a client it may look like a difficult task to choose secondary targets but do not worry. We have the expertise and experience to choose targets for you based on the content in your samples. We also have stock calibrations to suit the targets.

The analyzers have a rotating target changer and can be fitted with three secondary targets. A client can for instance choose to use a Ba/Mo target for the common sample streams. Additionally, they choose a Fe target because they also have a high grade Sulphur concentrate. What target to use for a specific sample stream is configurable in the analyzer software. The user can choose any combination of sample and target. This level of optimization is only available on the Boxray analyzers.

Some XRF equipment uses direct excitation of the sample. This means that the Tungsten x-rays from the x-ray tube is directly aimed at the sample and the detector registers the photons emitted by the elements in the sample. This approach is simpler but it comes at the cost of reduced accuracy, particularly for the lighter elements.

The sophisticated approach used in the Boxray analyzers gives a fine tuned X-ray excitation of the sample, for light and medium/heavy elements. At the same time it reduces the radiation to a minimum, for workplace safety.

The end result is a spectrum with x-ray energy on the X-axis and number of photons on the Y-axis. The spectrum is then fed to the analyzer software and the sample's contents is calculated.

Our commitment is not short term. It is there for the long haul. If we are not your closest contact, one of our partners is. Regardless of which it is you, as the customer, are central.
We use cookies to ensure that we give you the best experience on our website. If you continue to use this site we will assume that you are happy with it.OKRead more